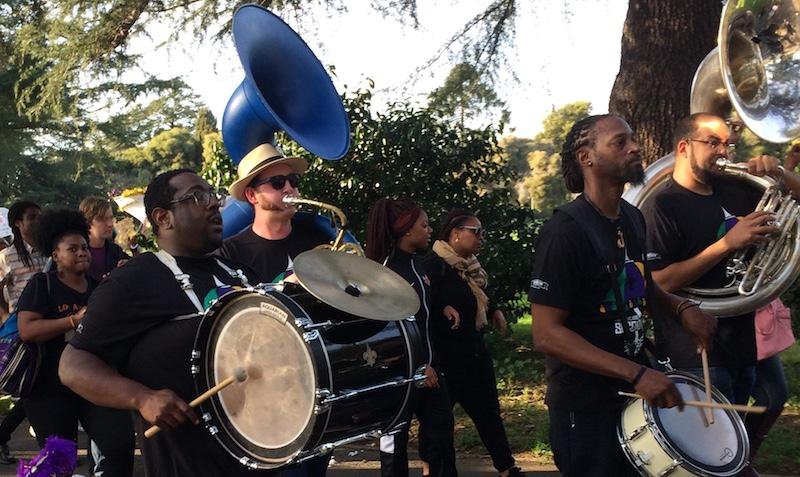 When I arrive at Arroyo Viejo Park in East Oakland, the neighborhood looks more like the French Quarter in New Orleans. Sounds from the band MJ’s Brass Boppers fill the streets. People are dancing, holding gold-trimmed parasols in their hands and wearing Mardi Gras beads around their necks. Residents are on their porches, waving to us as we pass by.

I grew up a few miles away from this East Oakland park, but this is the first time I’m parading in a “Second Line” celebration. It’s a parade of dance and live music that’s more common in  New Orleans than in Oakland, but an organization called the Oakland Second Line Project just may change that.

Oakland native Rory Brown is carrying a parasol she decorated earlier. She notices jazz and other forms of African-American music in the band’s tunes.

When I ask Brown what this event means for Oakland, she says, “This just means that Oakland is claiming it’s rightful place as the center of Black culture in the Bay Area again.”

As for who threw this big party, I look for Nate Cameron. He’s the guy playing the big drums with MJ’s Brass Boppers. He also founded the Oakland Second Line Project.

He says, “The Oakland Second Line Project is a project that is bringing free cultural events to Oakland,” specifically for communities of color in Oakland.

Cameron grew up in New Orleans and has lived in Oakland for five years. He says what we know as the Second Line now began in Africa centuries ago. The community gathered and celebrated every big event with music and dance.

Cameron explains, “The drummers would get together with the leaders of the community. They would go to other communities and play the same rhythm. Everybody was dancing to the same rhythm, like a call to action. They’d call everybody to come and celebrate whether it was a new chief, the birth of a new prince, or the death of a highly respected person in the community,”

Enslaved Africans carried the tradition to New Orleans. That’s because slave owners of French and Spanish descent in Louisiana were more lax about their slaves practicing their culture. Other slave owners across the South were less accepting. Enslaved and freed Black people gathered on Sundays only, in an area just off the French Quarter that became known as Congo Square.

“[They] practiced their traditional religion and dance,” says Cameron.  “They could speak in their traditional tongue. That was illegal for the rest of the week. Congo Square was the catalyst for Black people to essentially be themselves and out of that birthed Second Line culture.”

Cameron says the cause for the gathering — a newlywed couple or a hearse — makes up the First Line. Behind them are the bands, which make up the Second Line. The dancers and marchers follow behind the band.

These Second Lines may be a new thing in Oakland, but the city has deep Southern roots. From 1915 to 1970, six million Black Southerners moved to other parts of the country for better opportunities, a time historians call the Great Migration. Around World War II, many African Americans came to Oakland. Between 1940 and 1945 Oakland’s Black population quadrupled. One of the largest migrant populations to Oakland came from Louisiana.

“Pretty much everybody from Oakland, either your parents or grandparents or somebody is from Texas, Louisiana, or somewhere like that,” says Oakland resident Belinda Simmons, dancing along with the band.

Simmons grew up in Oakland, but her mother is from Louisiana. She’s at the Oakland Second Line with her extended family who is visiting from Louisiana for a funeral. I ask them when they last danced in a Second Line.

“We just did one yesterday for my uncle’s funeral,” says Simmons. “We do Second Lines for weddings, for funerals, for everything.”

Black Southern culture remains part of the fabric of Oakland. That’s evident by such things as the soul food restaurants and the vernacular spoken here. Nate Cameron, who studies and teaches music, says there are musical ties here too.

“I collect rare black vinyl from musicians from New Orleans,” Cameron shares.  “I just started to notice a lot of ties between New Orleans and Oakland. A lot of these artists were port workers and signed to labels based out of here and vice versa. Because they worked at the port and were musicians, they would come to the port and do gigs.”

Leading the parade today is Ray “Big Chief “ Blazio knows a lot about Second Lines. He moved to Oakland after Hurricane Katrina with help from an Oakland couple. He met them before the storm while the were vacationing in the Big Easy.

“They came to New Orleans for the Jazz and Heritage Festival in 2005,” says Big Chief. “They stayed in touch with me. Then when Katrina hit they sent for me.”

Big Chief is one of about 1,000 people who moved to the Bay Area from New Orleans after Katrina. Back in New Orleans, he is known for being chief of a Mardi Gras Indian tribe, which spent all year preparing for Mardi Gras or Carnival.

Big Chief says, “I first start masking in Carnival in the 1960s.”

Masking is the process of crafting the elaborate attire of the Mardi Gras Indians. African-Americans from inner-city New Orleans spend all year creating extravagant, colorful, Native-American inspired dress, such as neon-colored head-dresses with matching face paint and intricate beaded clothing. Then they parade down the street. See for yourself.

Big Chief isn’t masking at this parade. He’s wearing an Oakland Second Line Project t-shirt with a ball cap and parasol. No matter what he wears, he says leading a Second Line makes him feel at home.

Reclaiming the Culture in a New Oakland

As Big Chief and the band lead us around the park, I notice people’s expressions go from “Huh?” to “Hey!” East Oakland resident Vernetta Woods was just sitting on the grass with her kid when the Second Line surprised her. She says this is “good!”.

“This is what we were doing in our city years ago,” says Woods. “So it’s sort of welcoming.”

She says as Oakland’s culture has been changing, she’s been considering moving. Watching the Second Line and the mostly black parade is giving her second thoughts. “Should I leave or should I stay?” asks Woods. “We’re talking about bringing back our block parties and just that feel we used to have in the ‘80s, when things were just all black owned back here.”

She says,“Maybe something is [about] to go on here, because I can see it.”

New Orleans native Michael Jones founded MJ’s Brass Boppers. With so much going on in society today and for some, our personal lives, he says music is medicine.

I want an expert rating on the second line and check back with the Louisiana family. When I ask Robin Privost Gray — who’s visiting from New Orleans — if this East Oakland Second Line was authentic, she answers immediately:

The music eventually stops, but not the mood. People smile and hug goodbye. The Louisiana family are all giggles. They leave me with these New Orleans/Oakland words for my next Second Line.

“Let the good times roll. Laissez le bon temps rouler. And free your mind, so the rest will follow.”